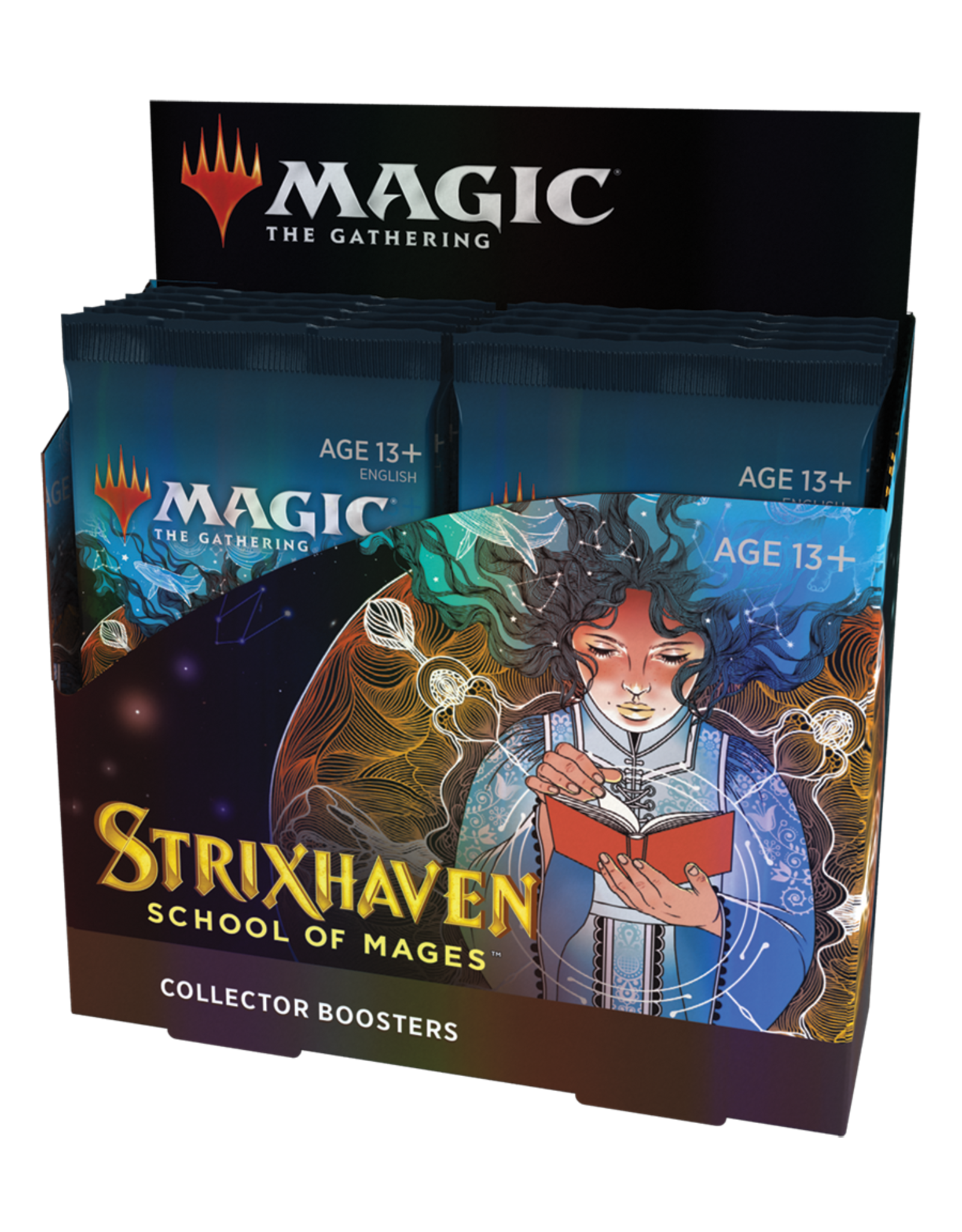 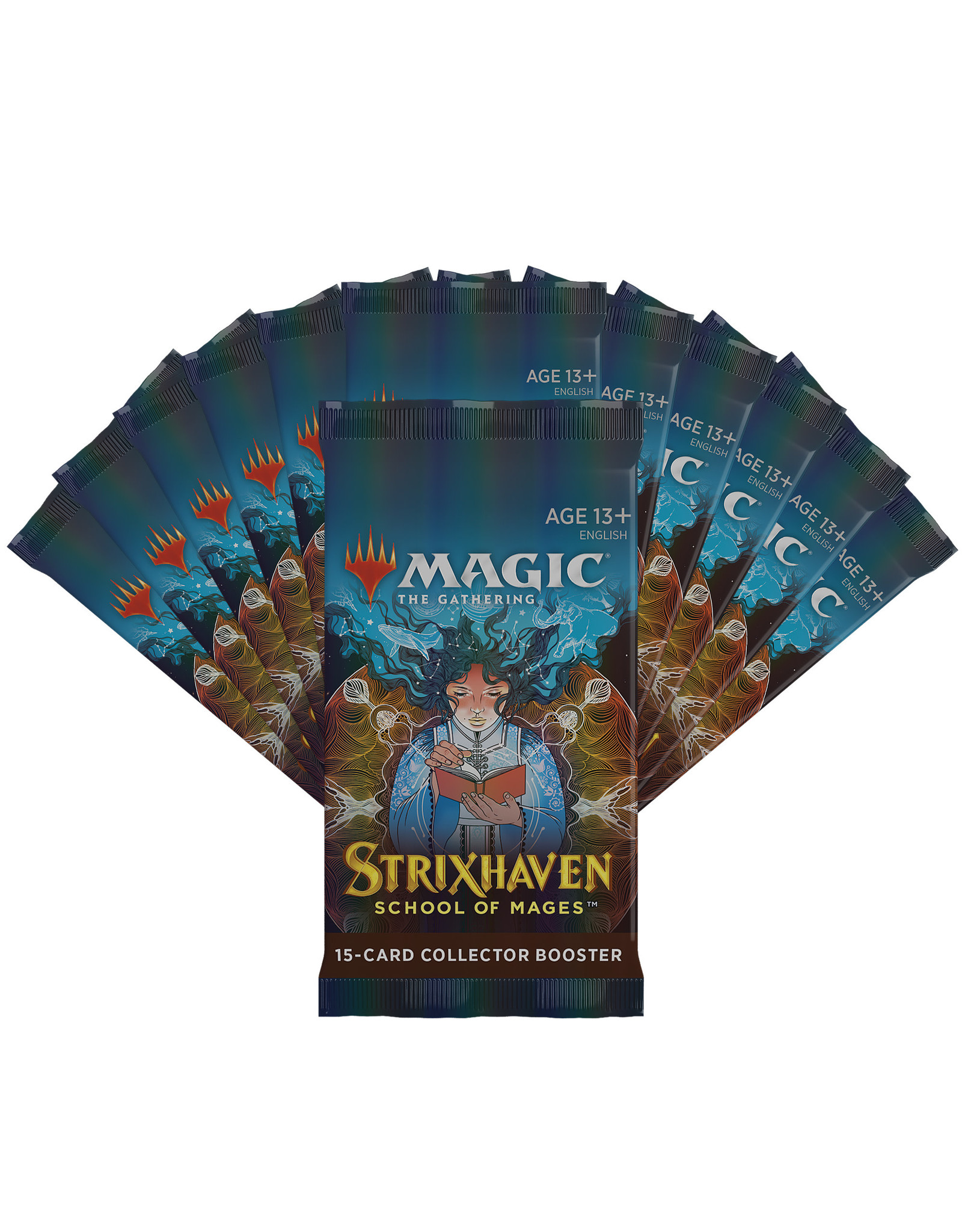 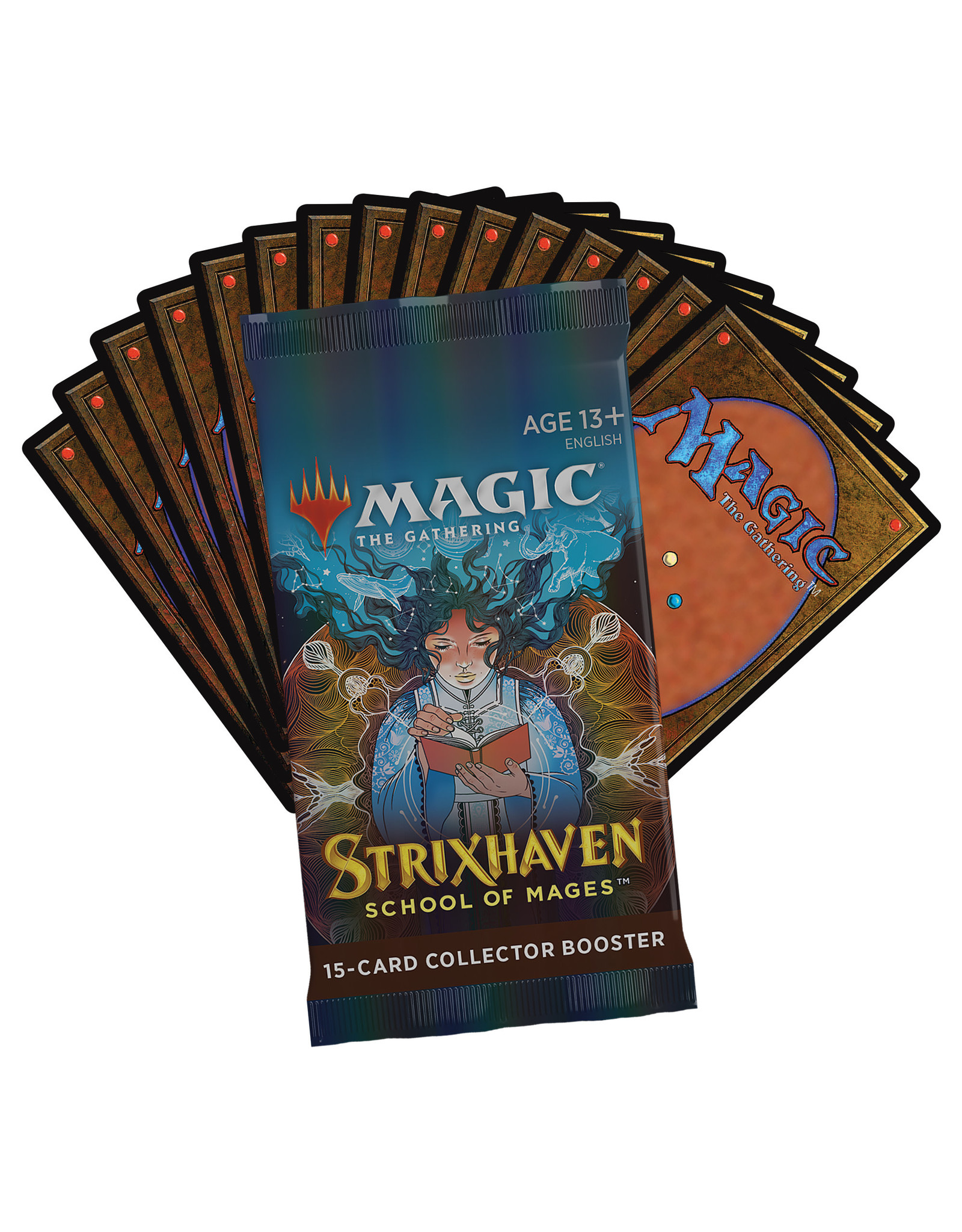 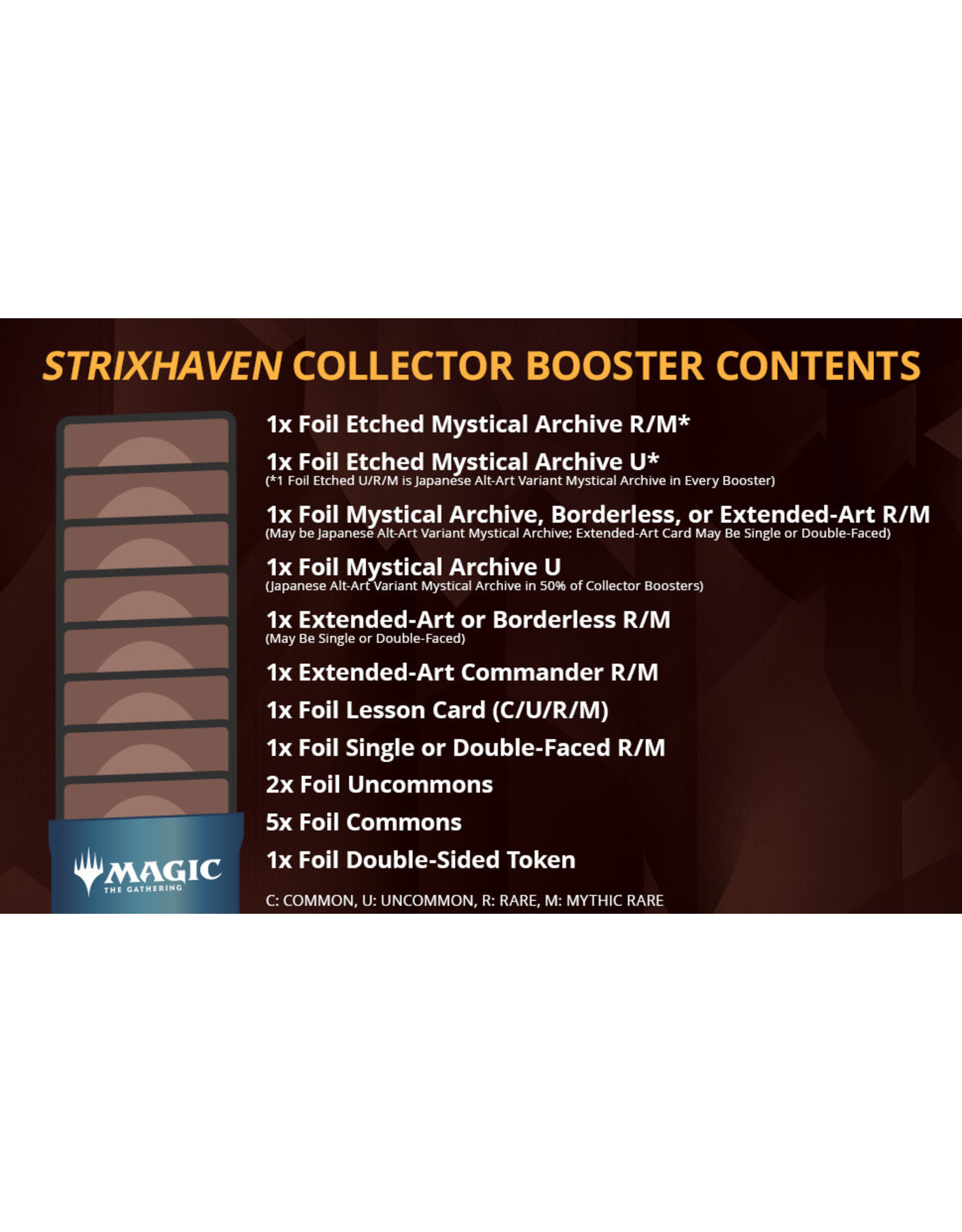 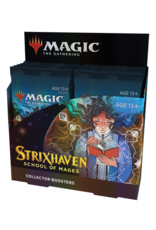 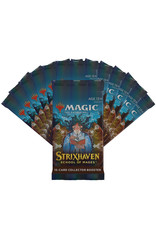 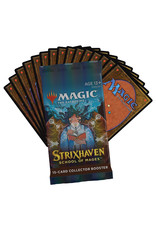 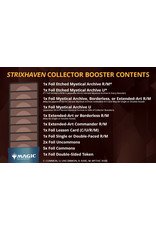 Choose your college at the most prestigious university for magical learning in Magic's Multiverse! Collector Boosters are the ultimate way to add special card styles and hard-to-find cards to your collection. Loaded with rares, foils, special card treatments, and more—if you're looking to collect the coolest cards in the set, look no further.

Which College Will You Choose?

Welcome to Strixhaven, the Multiverse's most prestigious university for the study of magic!

Founded centuries ago by five spellcasting dragons—Strixhaven is divided into five colleges that reflect their founder's magical specialty and distinctive personality.

Prismari (Red/Blue): Artsy elementalists wielding fire and ice with spells that are spectacles of raw creativity.

Witherbloom (Green/Black): Witchy biologists who brew herbal concoctions to control the essence of life and death.

Lorehold (Red/White): Adventurous historians who bring the spirits of the past to life and call forth magic from ancient tomes.

Quandrix (Blue/Green): Quirky math magicians who study patterns and fractals to command and multiply the forces of nature.

Choose your college and join the duel between schools for a some friendly (and a tiny bit deadly) magical competition.

Your Shortcut to the Hottest Cards

Collector Boosters are the ultimate way to add special card styles and hard-to-find cards to your collection. Loaded with rares, foils, special card treatments, and more—if you're looking to collect the coolest cards in the set, look no further.

Every Strixhaven Collector Booster contains a combination of 5–6 Rare or Mythic Rare cards and a total of 6 cards with special treatments, with 11 traditional foils, 2 foil etched cards, and 1 foil token per pack.

1–3 Japanese Alt-Art Cards in Every Pack

Every Strixhaven Collector Booster Pack contains at least three cards from the Mystical Archive—a sorcery or instant with beautiful art and a special showcase frame.

Every Mystical Archive card can also be found with a special treatment exclusive to Japanese-language cards, featuring stunning alternate art by Japanese artists. Strixhaven Collector Boosters are the only Strixhaven boosters that always contain at least one Japanese alt-art variant Mystical Archive card in every pack, with a possibility of up to three in every pack.

Unlike traditional foils with a solid shine that covers the entire card, foil etched cards feature foil delicately etched into the frames of the card.

Not found in any other Strixhaven boosters, every Strixhaven Collector Booster contains two foil etched Mystical Archive cards, including one foil etched Japanese alt-art variant, with a glitter that highlights their showcase frames and distinctive art.

Strixhaven Collector Boosters are the only Strixhaven boosters that include extended-art cards. These cards put the art of rare and mythic rare cards in the set on full display, with art that extends all the way to the border of the card.

In this latest release, Magic fans join the battle between five different colleges at Strixhaven, the most prestigious university for magical learning in the Magic Multiverse. Each college has its own unique personality and playstyle, and players can choose whichever college they prefer.

Collector Boosters are supercharged booster packs, loaded with nothing but the best. Each pack includes 15 of the most desirable cards from Strixhaven.

* This is a preorder. We will email you as soon as your order is ready. Release dates are subject to change. Due to shipping and production challenges beyond our control, delays or cancellations may occur. We will do our best to keep you informed of any changes with your order.

If you order in-stock items along with preorder items, or order multiple preorder items with different release dates, we will hold your entire order until all items are ready. If you would prefer to receive some items separately, please place multiple orders.

Add your review
0 stars based on 0 reviews
Preorder / Strixhaven /

Choose your college at the most prestigious university for magical learning in Magic's Multiverse! The best way to open packs just for the fun of opening them – Set Boosters are the go-to if you're looking to rip open a Magic: The Gathering booster pack j
Add to cart
MTG Strixhaven Set Booster Box
$179.70
$125.79
Preorder 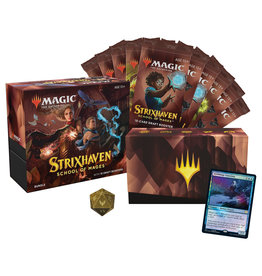 Choose your college at the most prestigious university for magical learning in Magic's Multiverse! A Bundle is the most giftable Magic product—with a mix of Draft Boosters, lands, a card storage box, an oversized Spindown and more, it's a great way to kic
Add to cart
[Preorder] MTG Strixhaven Bundle
$39.99
Coming Soon 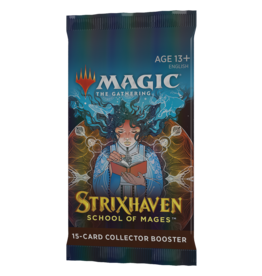 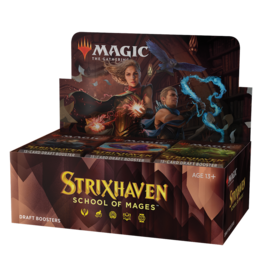 Choose your college at the most prestigious university for magical learning in Magic's Multiverse! The best Strixhaven boosters for drafting, one Draft booster Box includes enough packs to draft with up to 12 players. Just add lands and join the battle be
Add to cart
[Preorder] MTG Strixhaven Draft Booster Box
$162.00
$129.60